Gallatin – Mural artist Bryan Deese has been in the center of the community art scene in Nashville for the past decade. His murals depicting music icons like Johnny Cash, Jimmy Buffett and Loretta Lynn can be found all over Nashville including Exit/In and Five Points in East Nashville. His newest creation, a mural at Thompson Park in Gallatin, showcases a Gallatin native who was Tennessee’s first professional skateboarder.

Deese admits his offer to do the project at no cost was fueled by his admiration for one of his childhood idols and his love for the sport he still enjoys as a 43-year-old. “I’m excited to have Ray looking over the skate park,” says Deese. “Hopefully generations of Gallatin skaters are going to see this…it could influence their skating in that it doesn’t have to start and end in this small park, but they can take it as far as they want. This guy laid the foundation for Sumner County and for middle Tennessee skaters.”

Ray Underhill was a member of the infamous Bones Brigade squad of the 1980s, which included famous riders such as Stacy Peralta, Tony Hawk, Mike McGill and Steve Caballero. The skating team toured the United States and Europe exhibiting innovative tricks and gear of that time.

What kind of impression did Ray Underhill make on people he met?
He always left you smiling. He was kind, humble, extremely talented, and always funny. The impression he left on all of us is that we wanted to spend more time with him.

What did you think when you heard a mural of Ray Underhill was being created near his hometown in Gallatin, Tennessee?
I was excited to know that the city would honor him in such a unique way. It is a testament to how far we’ve come as skaters, but more importantly it shows how Ray’s spirit continues to inspire.

What would you want people to know about Underhill when they see the mural?
My nickname for Ray was “BDE” meaning Best Dude Ever, and I mean that in every sense. He was a prolific skater and the most fun to travel with, a devoted husband, a doting father, a talented artist and musician, a hard worker, and the best friend you could ever ask for. And he did it all with effortless finesse.

Did Underhill have any signature moves?
Absolutely. His “Pop-tarts” and stale frontside inverts were groundbreaking, and to this day nobody can do them like he did.

Underhill died in 2008 after a fighting a Chordoma brain tumor, a rare spinal cancer. The Ray Underhill Foundation was established and is operated by Underhill’s widow Kerry Overman.  “We were very excited to hear that a mural was going to be created in Ray’s memory at a skate park so close to where he grew up,” said Overman. “Ray loved his family, he loved life and he loved skateboarding. Ray always appreciated the love and support received from the people of Tennessee. Thank you so much for honoring him in this way!”

Gallatin Mayor Paige Brown says she recognizes community artwork isn’t reserved for big cities like Nashville. “Whether it’s a mural or other forms of public art, it’s a way to connect with the community and its history. We are very excited that Gallatin resident Bryan Deese is donating his talent and time to tell Ray Underhill’s story right here in Thompson Park.”

The mural depicts Ray Underhill doing a hand plant. The chain and cross Underhill is wearing in the design is featured on his signature model skateboard. The icons at the bottom of the mural reflect Underhill’s sponsors in the 80s, Rat Bones wheels and Air Walk shoes. 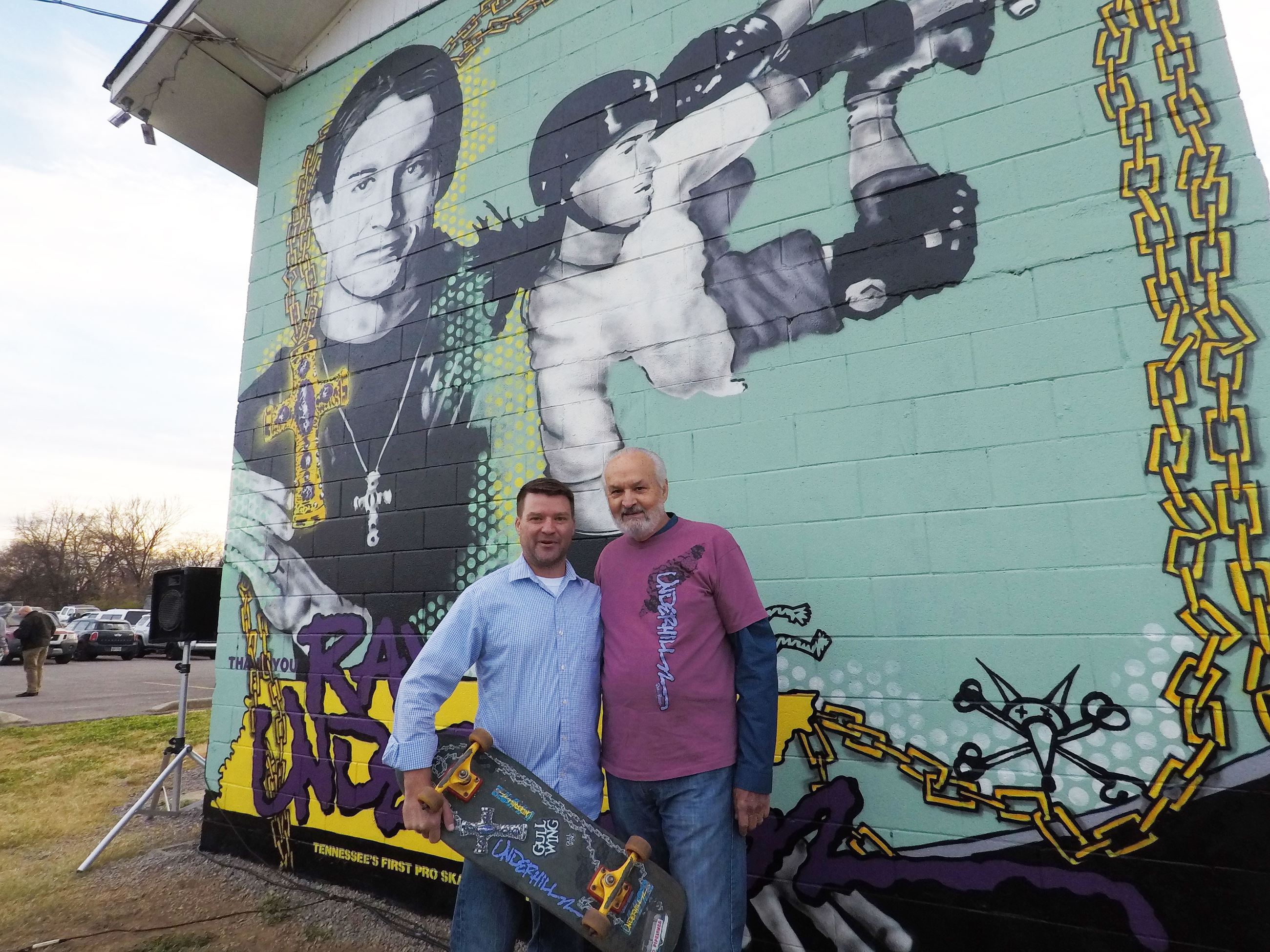